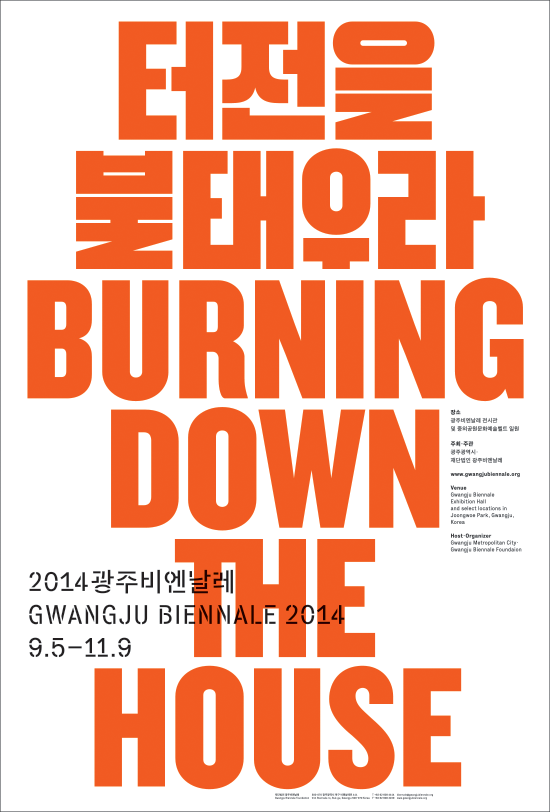 The 2014 Gwangju Biennale explores the process of dynamism and innovation through the theme of Burning Down the House, to examine the new aesthetic value and the discourses on Asianness.

Burning Down the House looks at the resistance and challenge against established institutions, as well as creative destruction and new start, so that cultural diversity is expressed through traditional forms of art, installation art, performance, new media, movie, theater, music and architecture.

The theme comes from the famous song title of a popular progressive group called Talking Heads from New York during the early 1980s, which has been borrowed because it suitably delivers the direction and purpose of the 2014 Gwangju Biennale.

It is notable that large numbers of performances have been introduced in order to display the dynamism, including movement for transformation and reform, criticism against customs and institutions, political interventions and creative acts.

In addition, about half of Asian artists attended reflecting the prestige of Gwangju Biennale, which has been exploring the Asian value and Asianness during the past twenty years as Asia’s largest biennale, aiming to deliver the discourses on art by including the Third World countries like South America rather than focusing on Europe.

From the burning fire ring of Icelandic artist Olafur Eliasson to the burned paintings of Yves Klein and Otto Piene, the Biennale will look at the importance of fire to artists around the world. Chinese artist Liu Chuang carries a hand made torch made from the New Year celebration’s debris in a poetic film shot in his hometown and Romanian artist Mircea Suciu produces incendiary drawings out of charcoal. The charred remains of wood from a forest wildfire in the hanging installation by Cornelia Parker and the surreal interior landscape of Eduardo Basualdo's La Isla further engage with the theme of burning and transformation in diverse ways.