Soft and weak like water curated by Sook-Kyung Lee 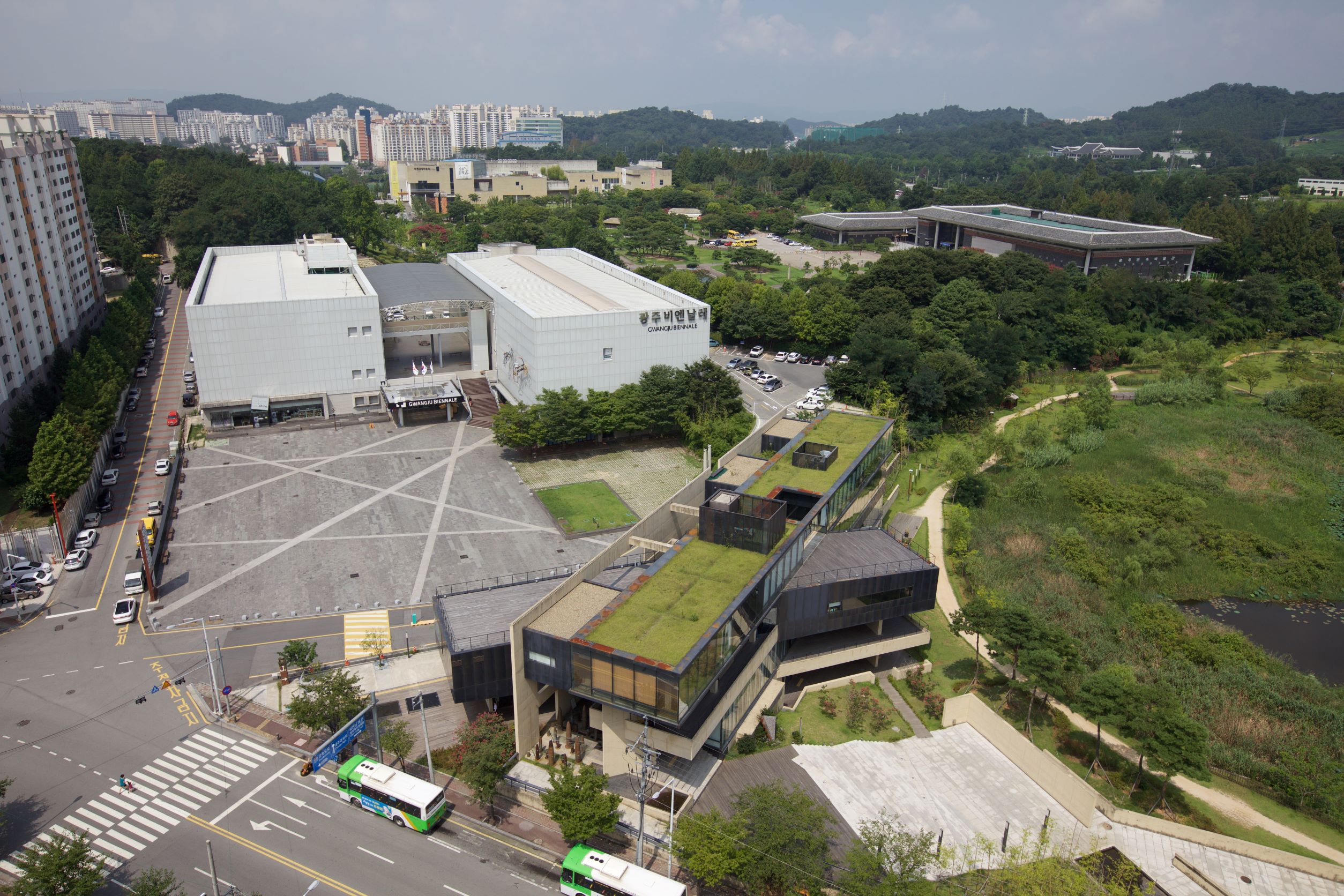 The 14th Gwangju Biennale proposes to imagine our shared planet as a site of resistance, coexistence, solidarity and care by thinking through the transformative and restorative potential of water as a metaphor, a force, and a method. Soft and weak like water celebrates an aqueous model of power that brings forth change, not with an immediate effect but with endurance and pervasive gentleness, flowing across structural divisions and differences. Embracing contradictions and paradoxes – as “there is nothing softer and weaker than water, and yet there is nothing better for attacking hard and strong things” (Dao De Jing, chap.78) – the Biennale’s theme highlights the capacity of art to permeate deep into the individual and the collective, which enables us to navigate through the complexities of the world with a sense of awareness and direction.

Soft and weak like water thus explores the subtle undercurrents and intangible forces of art that relate to all aspects of human experience – from the emotional and psychological to the social and political – with the hope of restoring the fluid wholeness of here and everywhere, now and everywhen, one and everything. This involves examination of how artists from different corners of the globe are responding to current crises that are affecting the whole world, from the life-threatening pandemic and deepening war and refugee crisis to reinforced racism and climate catastrophes. The Biennale will underscore how these responses encourage diverse and multifaceted actions on a transnational level. It aspires to understand seemingly disparate yet equally urgent global issues as one entanglement that affects the whole planet and its inhabitants; problem which require shared planetary vision. A perspective that transcends national or regional boundaries, and diverse and at times opposing values, is necessary in contemplating the common future of humanity. By employing a relational cosmology that privileges change, fluidity and indeterminacy as a lens to view current crises and corresponding artistic practice, the Biennale intends to present the planet as a shared, interconnected, borderless space intertwined with the time before and after the Anthropocene.

The 14th Gwangju Biennale embraces the city of Gwangju as the origin and source of the ‘Gwangju spirit’, which is already implicated in multiplicity. The city became a sacred symbol of democracy, resistance and justice after the ‘Gwangju Uprising’ of 1980 (also known as ‘Gwangju Democratization Movement’). The denial and suppression that continued in the following years by the paramilitary regime did not dampen the city’s efforts in launching a major international art biennial in 1995 to remember and honour the sacrifice of their citizens. Posing a question “What does it mean to think of Gwangju as not only a geography or locality, but a paradigm, a manual, an epistemological framework?”, Soft and weak like water seeks to reinterpret the wave of change the city and its people generated through contemporary art. The opportunity to think through and with the city of Gwangju could expand our perspective beyond the binary structure of a geographical centre and a periphery, encouraging us to understand the world as the cumulative effect of transnational intersections and connections distributed across time and space.

Another key aim of the Biennale is to address Gwangju’s historic identification as ‘Yehyang (藝鄕, a region of art and culture)’, renowned for its calligraphy, ink painting, pansori, lacquerware and other traditional arts and crafts. Combined with extensively practiced philosophical and behavioural teachings of Buddhism, Confucianism and Daoism (which value the negation of desire, high ethical standards and non-action as a way of nature respectively), the city’s strong tradition of artistic practice and sensibility could be surfaced and understood in connection with ancestral teachings present in other cultures. By drawing inspiration from the artistic and cultural roots of Gwangju, Soft and weak like water intends to show the city’s transcultural resonance with what might appear to be remote and unrelated, such as Latin American indigenous cultures, South Pacific cosmology, North African poetics, and cultural legacies of the trading routes in Indian Ocean and Central Asia.

What emerges through these imaginative intersections is an interconnected, planetary vision of ourselves in relation to one another and what is beyond us, highlighting fluid connections between traditions and cultures across geopolitical boundaries. It is hoped that such a vision will enable us to critically re-evaluate the existing structures of knowledge which were predominantly shaped by modernist, often Western, colonial perspectives, and demonstrate how another system of knowledge is possible: one of ancestral and indigenous knowledge rooted in respective histories and cultural identities. We are invited to learn how to exist together in our differences, to find solidarity in both our affinities and our singularities.